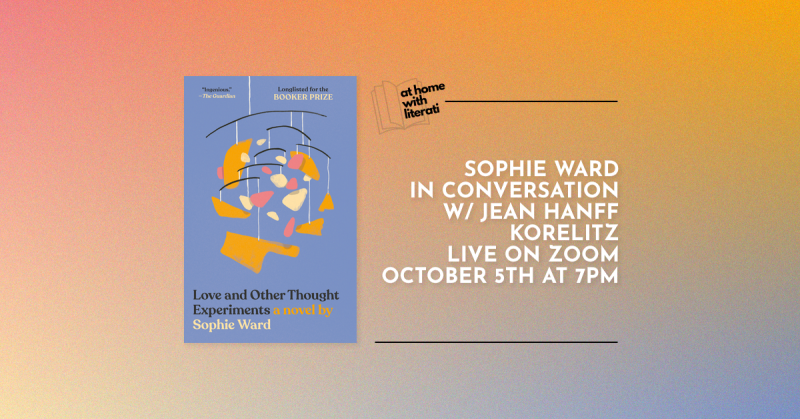 We're pleased to welcome Sophie Ward to our At Home with Literati Series in support of Love and Other Thought Experiments. She'll be joined in conversation by Jean Hanff Korelitz.

Click here to join the webinar event on 10/5. No pre-registration required!

About the book: This impressive debut novel, longlisted for the 2020 Booker Prize, takes its premise and inspiration from ten of the best-known thought experiments in philosophy--the what-ifs of philosophical investigation--and uses them to talk about love in a wholly unique way.

Married couple Rachel and Eliza are considering having a child. Rachel wants one desperately, and Eliza thinks she does, too, but she can't quite seem to wrap her head around the idea. When Rachel wakes up screaming one night and tells Eliza that an ant has crawled into her eye and is stuck there, Eliza initially sees it as a cry for attention. But Rachel is adamant. She knows it sounds crazy--but she also knows it's true. As a scientist, Eliza is skeptical. Suddenly their entire relationship is called into question.

What follows is a uniquely imaginative sequence of ten interconnecting episodes--each from a different character's perspective--inspired by some of the best-known thought experiments in philosophy. Together they form a sparkling philosophical tale of love lost and found across the universe.

Sophie Ward is an actor and a writer. She has published articles in The Times, The Sunday Times, The Guardian, The Observer, The Spectator, Diva, and Red magazine, and her short stories have been published in the anthologies Finding A Voice, Book of Numbers, The Spiral Path, and The Gold Room. Her book A Marriage Proposal: The Importance of Equal Marriage and What it Means for All of Us was published as a Guardian short eBook in 2014. In 2018, Sophie won the Pindrop short story award for Sunbed. She has a degree in philosophy and literature and a PhD from Goldsmiths, University of London, on the use of narrative in philosophy of mind.

Jean Hanff Korelitz is the New York Times bestselling author of the novels The Plot, You Should Have Known (which aired on HBO in October 2020 as The Undoing, starring Nicole Kidman, Hugh Grant, and Donald Sutherland), Admission (adapted as a film in 2013 starring Tina Fey), The Devil and Webster, The White Rose, The Sabbathday River and A Jury of Her Peers, as well as Interference Powder, a novel for children. Her company BOOKTHEWRITER hosts Pop-Up Book Groups in which small groups of readers discuss new books with their authors. She lives in New York City with her husband, Irish poet Paul Muldoon.

Love and Other Thought Experiments (Paperback)