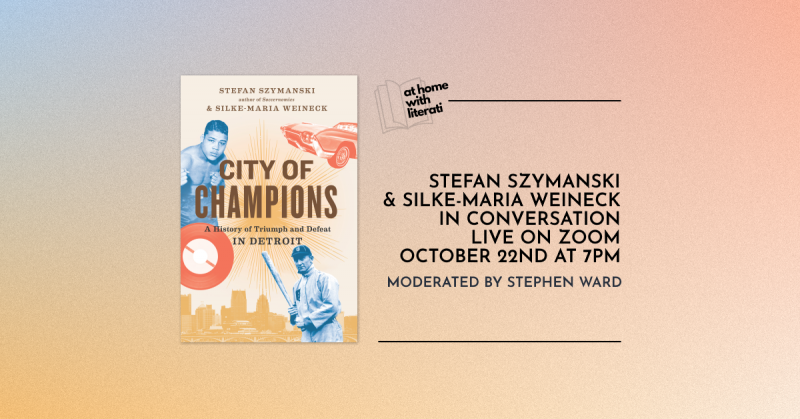 We're pleased to welcome Stefan Syzmanski & Silke-Maria Weineck to our At Home with Literati series to discuss their new book City of Champions. They'll be in conversation with our moderator, fellow professor and historian Stephen Ward, director of the University of Michigan's Semester in Detroit.

The changing fortunes of Detroit, told through the lens of the city's major sporting events, by the bestselling author of Soccernomics, and a prizewinning cultural critic

From Ty Cobb and Hank Greenberg to the Bad Boys, from Joe Louis and Gordie Howe to the Malice at the Palace, City of Champions explores the history of Detroit through the stories of its most gifted athletes and most celebrated teams, linking iconic events in the history of Motown sports to the city's shifting fortunes.

In an era when many teams have left rustbelt cities to relocate elsewhere, Detroit has held on to its franchises, and there is currently great hope in the revival of the city focused on its downtown sports complexes--but to whose benefit? Szymanski and Weineck show how the fate of the teams in Detroit's stadiums, gyms, and fields is echoed in the rise and fall of the car industry, political upheavals ushered in by the depression, World War II, the 1967 uprising, and its recent bankruptcy and renewal.

Driven by the conviction that sports not only mirror society but also have a special power to create both community and enduring narratives that help define a city's sense of self, City of Champions is a unique history of the most American of cities.

Stefan Szymanski, co-author of Soccernomics, is a sports economist who teaches sport management at the University of Michigan. The co-author (with Silke-Maria Weineck) of City of Champions: A History of Triumph and Defeat in Detroit, he lives in Ann Arbor.

Silke-Maria Weineck, author of The Tragedy of Fatherhood, is a professor of Comparative Literature at the University of Michigan. The co-author (with Stefan Szymanski) of City of Champions: A History of Triumph and Defeat in Detroit, she lives in Ann Arbor.

Stephen Ward is a historian who teaches at the University of Michigan in the Department of Afroamerican and African Studies and the Residential College. He is the faculty director of UM's Semester in Detroit program, a board member of the James and Grace Lee Boggs Center to Nurture Community Leadership in Detroit, and the author of In Love and Struggle: The Revolutionary Lives of James and Grace Lee Boggs.
Event date:
Thursday, October 22, 2020 - 7:00pm
Event address:
Live on your device