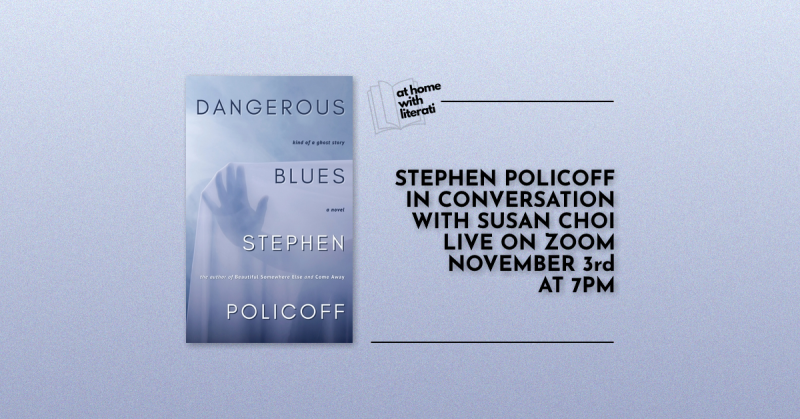 We're pleased to welcome Stephen Policoff to our At Home with Literati Series in support of Dangerous Blues. He will be joined in conversation by Susan Choi.

Click here to join the webinar event on 11/3. No pre-registration required!

Dangerous Blues explores a dark yet comic storm of family relationships laced with a buzz of the supernatural, where the fleeting light of the present must constantly contend with the shadows of the past.

Paul Brickner and his 12-year-old daughter Spring are subletting an apartment in New York City. They came to escape the sorrow of their empty house in upstate New York after Nadia, Paul’s wife and Spring’s mother, dies.

But Paul begins to fear that he is being haunted by Nadia, who appears to him in fleeting images. Is he imagining it, or is she real? Tara, who grew up in the inscrutable New England cult known as the Dream People, is haunted, too, hounded by her very real brothers to return to the family, and to give back the magical object—a shamanic Tibetan vessel—which they claim she stole from them.

Driven by Paul’s new circle of odd and free spirited iconoclasts, Dangerous Blues asks the question: when do you let go, and what are you willing to let go of?

Stephen Policoff is the author of Beautiful Somewhere Else, which won the James Jones Award, and was published by Carroll & Graf. His second novel, Come Away, won the Dzanc Award, and was published by Dzanc Books in 2014. He was writer-in-residence at Medicine Show Theater Ensemble, with whom he wrote Shipping Out, The Mummer’s Play, Ubu Rides Again, and Bound to Rise, which received an Obie. He was also a freelance writer for Cosmopolitan, Ladies Home Journal, New Age Journal, and many other publications. He helped create Center for Creative Youth, based at Wesleyan University, and has taught writing at CUNY, Wesleyan, and Yale.  He is currently Clinical Professor of Writing in Global Liberal Studies at NYU, where he has taught since 1987.

Susan Choi is the author of the novels My Education, American Woman, A Person of Interest, and The Foreign Student. Her work has been a finalist for the Pulitzer Prize and the PEN/Faulkner Award and winner of the PEN/W.G. Sebald Award and the Asian-American Literary Award for fiction. With David Remnick, she co-edited Wonderful Town: New York Stories from The New Yorker. She lives in Brooklyn.