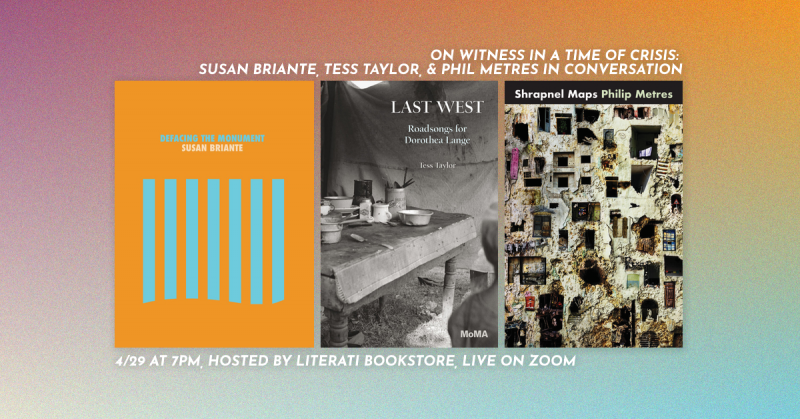 We're pleased to welcome Susan Briante, Phil Metres, and Tess Taylor to our At Home with Literati series for a panel discussion entitled On Witness in a Time of Crisis.

In 1936, noting a turn toward the documentary in a variety of arts, Wallace Stevens explained the Depression had focused attention "in the direction of reality, that is to say, in the direction of fact." At a time of unprecedented environmental, political, and economic crisis we may be experiencing another such turn.  But what does this mean for poetry, and what are the limits and pitfalls of the documentary project? What roads does it open up?  Poets Susan Briante, Philip Metres, and  Tess Taylor will discuss and share some work from their recent books: Briante’s Defacing the Monument, lyric essays on immigration, archives, aesthetics and the state, Metres’ Shrapnel Maps, a docupoetic investigation into the wounds and reverberations of the Israel/Palestine conflict, and Taylor’s Last West: Roadsongs for Dorothea Lange a poet’s retracing of the steps of the documentary photographer.

Susan Briante’s book The Market Wonders (Ahsahta Press) was a finalist for the National Poetry Series. The Kenyon Review calls it “masterful at every turn.” She is also the author of the poetry collections Pioneers in the Study of Motion and Utopia Minus (an Academy of American Poets Notable Book of 2011), both from Ahsahta Press. Briante has received grants and awards from the Atlantic Monthly, the MacDowell Colony, the Academy of American Poets, the Dorothy Sargent Rosenberg Memorial Fund and the US-Mexico Fund for Culture. She is a professor of creative writing and literature at the University of Arizona.

Philip Metres has written numerous books, including Shrapnel Maps, Sand Opera, and The Sound of Listening. Awarded fellowships from the Guggenheim and Lannan Foundations, and three Arab American Book Awards, he is professor of English and director of the Peace, Justice, and Human Rights program at John Carroll University.

Tess Taylor is the author of the poetry collections Work & Days (2016) and The Forage House (2013). Her work has appeared in the Atlantic Monthly, the Boston Review, the Harvard Review, Literary Imagination, the Times Literary Supplement, Memorious, and the New Yorker. She was the 2010-2011 Amy Clampitt Resident, has received writing fellowships from Amherst College, the American Antiquarian Society, the Headlands Center for the Arts, and the MacDowell Colony. She was recently a Distinguished Fulbright US Scholar at the Seamus Heaney Centre at Queen’s University in Belfast and Anne Spencer Poet-in-Residence at Randolph College in Lynchburg, Virginia.