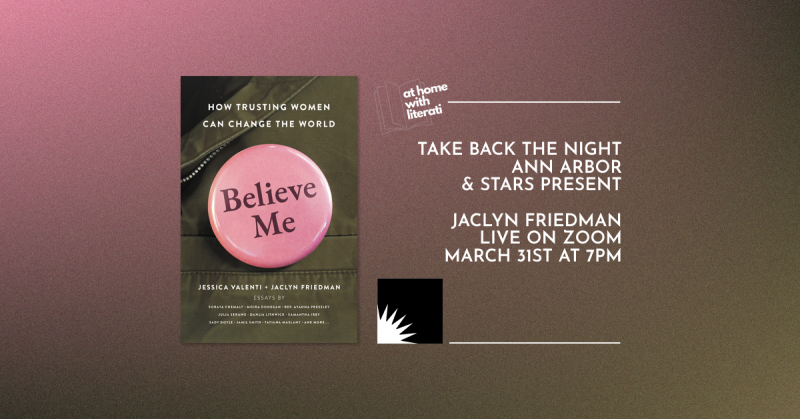 Literati is thrilled to host Jaclyn Friedman in support of Believe Me for a free virtual event presented by Take Back the Night Ann Arbor and STARS, with promotional partnership from the Ann Arbor District Library.

Click here to register for the free Zoom Webinar.

An email including the join link for the night-of will be sent to you after completing registration. Please make sure you have the latest Zoom software installed.

Signed bookplates will be available with any purchase of Believe Me.

Jaclyn Friedman is a writer, educator and activist, and creator of four books Yes Means Yes: Visions of Female Sexual Power and a World Without Rape (one of Publishers’ Weekly’s Top 100 Books of 2009), What You Really Really Want: The Smart Girl’s Shame-Free Guide to Sex & Safety, Unscrewed: Women, Sex, Power and How to Stop Letting the System Screw Us All, and her latest, Believe Me: How Trusting Women Can Change the World. Her podcast, also called Unscrewed, is paving new paths to sexual liberation, and was named one of the Best Sex Podcasts by both Marie Claire and Esquire.

As an undergraduate, Jaclyn thought she was too smart to become a victim of sexual assault – until another student proved her wrong. That experience eventually led her to become a student and instructor of IMPACT safety training. At IMPACT, she helped bring safety skills to the communities which most need them, including gang-involved high school students and women transitioning out of abusive relationships.

Friedman’s work has popularized the “yes means yes” standard of sexual consent that is quickly becoming law on many US campuses. In her book, Unscrewed, she calls on the movement for women’s sexual liberation to move past individualistic “empowerment” messages (for which she coined the term “fauxpowerment”) to focus on collectively transforming the systems and institutions invested in keeping women sexually servile. Kirkus called it “a potent, convincing manifesto,” and Kate Tuttle, president of the National Book Critics Circle, called it “the book we need right now.”

Friedman is a popular speaker on campuses and at conferences across the US and beyond. She has been a guest on the Today Show, Nightline, PBS News Hour, Call Your Girlfriend, and numerous other audio and TV shows, and her commentary has appeared in outlets including The New York Times, Vox, Refinery 29, The Washington Post, Glamour, and The Guardian. Friedman is a founder and the former executive director of Women, Action & the Media, where she led the successful #FBrape campaign to apply Facebook’s hate-speech ban to content that promotes gender-based violence. More recently, she has been active in the Jews Against ICE movement.

Believe Me: How Trusting Women Can Change the World (Hardcover)

What You Really Really Want: The Smart Girl's Shame-Free Guide to Sex and Safety (Paperback) 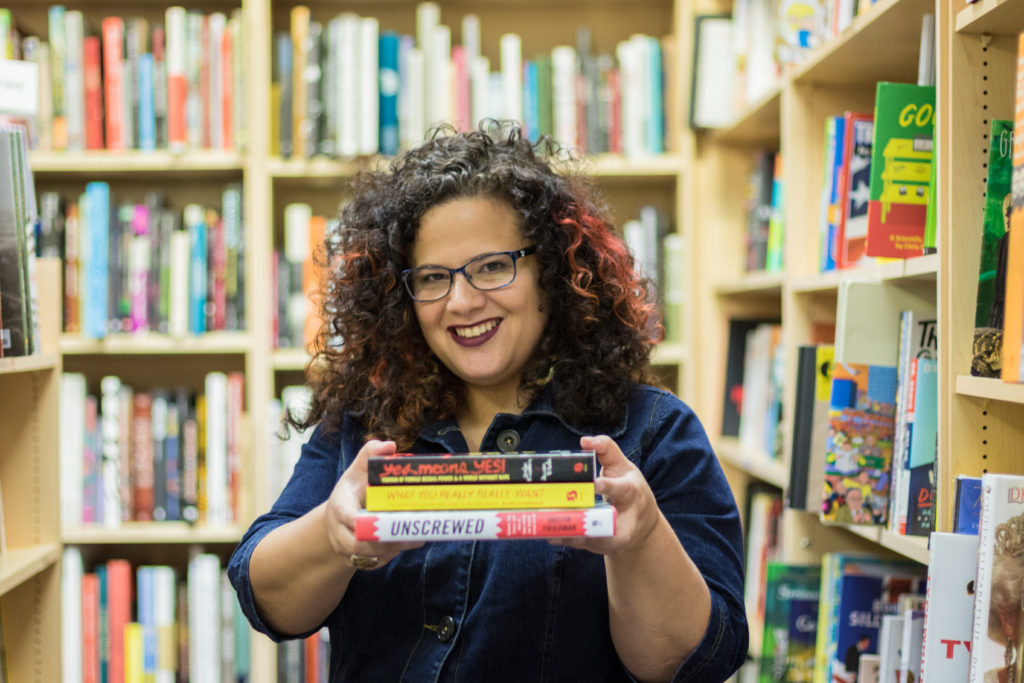