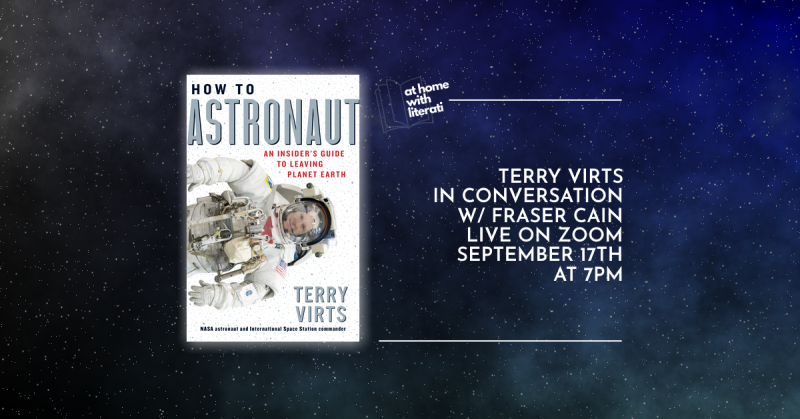 We're thrilled to welcome astronaut Terry Virts to our At Home with Literati virtual event series in support of How to Astronaut. He'll be in conversation with Fraser Cain, co-host of the Astronomy Cast podcast.

Ride shotgun on a trip to space with astronaut Terry Virts. A born stroyteller with a gift for the surprising turn of phrase and eye for the perfect you-are-there details, he captures all the highs, lows, humor, and wonder of an experience few will ever know firsthand. Featuring stories covering survival training, space shuttle emergencies, bad bosses, the art of putting on a spacesuit, time travel, and much more!

Colonel Terry Virts earned a Bachelor of Science degree in mathematics from the United States Air Force Academy in 1989, and a master of aeronautical science degree in aeronautics from Embry-Riddle Aeronautical University. Selected by NASA in 2000, he was the pilot of STS-130 mission aboard Space Shuttle Endeavour. In March 2015, Virts assumed command of the International Space Station, and spent over 200 days on it. Virts is one of the stars (and photographers) of the IMAX film, A Beautiful Planet, released in April 2016. He is also the author of View from Above (National Geographic, 2017). He lives near Houston.

Fraser Cain is the publisher of Universe Today and the co-host of the Astronomy Cast podcast. He's also the creator of the Guide to Space series of videos on YouTube. Fraser has been a space journalist for over 20 years, reporting on new discoveries in the Universe and space exploration.

How to Astronaut: An Insider's Guide to Leaving Planet Earth (Hardcover)