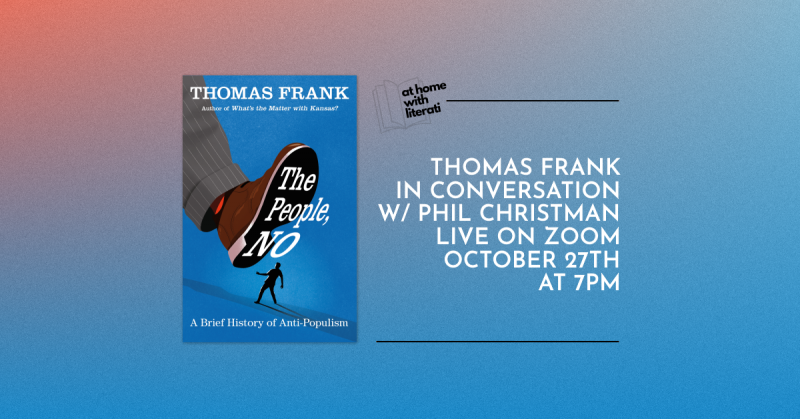 We're pleased to welcome Thomas Frank to our At Home with Literati series in support of The People, No. He'll be in conversation with the author of Midwest Futures and University of Michigan lecturer Phil Christman.

Note: we are now hosting on Zoom webinars. You will be prompted to enter a first name and email upon joining. You'll enter the event when it begins and will be able to submit questions using the Q&A feature.

From the prophetic author of the now-classic What's the Matter with Kansas? and Listen, Liberal, an eye-opening account of populism, the most important--and misunderstood--movement of our time.

Rarely does a work of history contain startling implications for the present, but in The People, No Thomas Frank pulls off that explosive effect by showing us that everything we think we know about populism is wrong. Today "populism" is seen as a frightening thing, a term pundits use to describe the racist philosophy of Donald Trump and European extremists. But this is a mistake.

The real story of populism is an account of enlightenment and liberation; it is the story of American democracy itself, of its ever-widening promise of a decent life for all. Taking us from the tumultuous 1890s, when the radical left-wing Populist Party--the biggest mass movement in American history--fought Gilded Age plutocrats to the reformers' great triumphs under Franklin Roosevelt and Harry Truman, Frank reminds us how much we owe to the populist ethos. Frank also shows that elitist groups have reliably detested populism, lashing out at working-class concerns. The anti-populist vituperations by the Washington centrists of today are only the latest expression.

Frank pummels the elites, revisits the movement's provocative politics, and declares true populism to be the language of promise and optimism. The People, No is a ringing affirmation of a movement that, Frank shows us, is not the problem of our times, but the solution for what ails us.

Thomas Frank is the author of Listen, Liberal, Pity the Billionaire, The Wrecking Crew, and What's the Matter with Kansas? A former columnist for The Wall Street Journal and Harper's, Frank is the founding editor of The Baffler and writes regularly for The Guardian. He lives outside Washington, D.C.

The People, No: A Brief History of Anti-Populism (Hardcover)