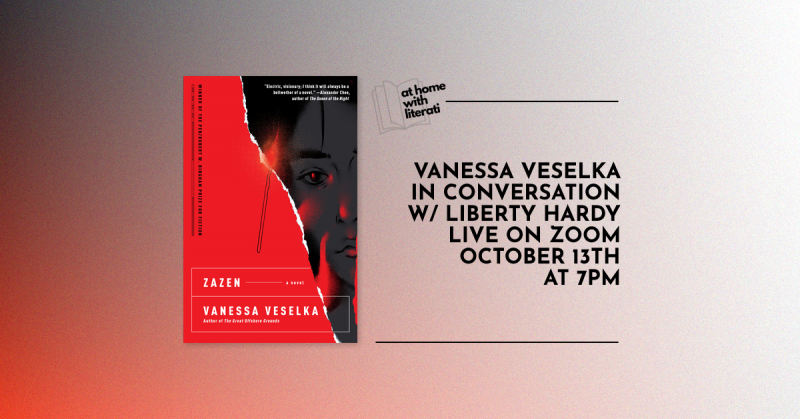 We're pleased to welcome Vanessa Veselka to our At Home with Literati Series in support of ZAZEN. She'll be joined in conversation by Liberty Hardy.

Click here to join the webinar event on 10/13. No pre-registration required!

About the book: From the author of the National Book Award longlisted epic The Great Offshore Grounds, here is the debut novel that launched her career--a story of activism, police violence, and white guilt in a not so distant dystopian America.

The world is on fire, and Della doesn't know what, if anything, she should do about it.

The country is poised on the brink of war. Curfews and other restrictions give the police an excuse for violence. Customers at the vaguely vegan cafe where Della is working after dropping out of grad school debate which foreign countries are the best to flee to: Costa Rica? Bali? Della's parents--former revolutionaries--are more excited at the idea of her brother and his Black wife giving them biracial grandbabies than in engaging in any new actions; her nominally activist coworkers are mostly devoted to planning a massive sex party. Della floats between them, lost and numb.

Then a bomb goes off: some shallow place of capitalistic worship demolished. Inspired, for reasons not entirely clear to herself, Della calls in a second--fake--bomb threat. But a bomb goes off there, too, and soon Della finds herself pulled in by a group of people who, for once, are promising to actually do something. No matter the consequences. Prescient when it was first published, Vanessa Veselka's debut novel is even more revolutionary now.

Vanessa Veselka is the author of the novel The Great Offshore Grounds, which was longlisted for the National Book Award. Her debut novel, Zazen, won the 2012 PEN/Robert W. Bingham Prize. Her short stories have appeared in Tin House and ZYZZYVA, and her nonfiction in GQ, The Atlantic, Smithsonian, The Atavist Magazine, and was included in The Best American Essays and the anthology Bitchfest: Ten Years of Cultural Criticism. She has been, at various times, a teenage runaway, a sex worker, a union organizer, a musician, a train hopper, a waitress, and a mother. She lives in Portland, Oregon.

Liberty Hardy is a senior contributing editor for Book Riot and host of the popular All the Books! podcast. She lives in the great state of Maine, where she reads 500-600 books a year and hangs out with her three cats, who hate to read.