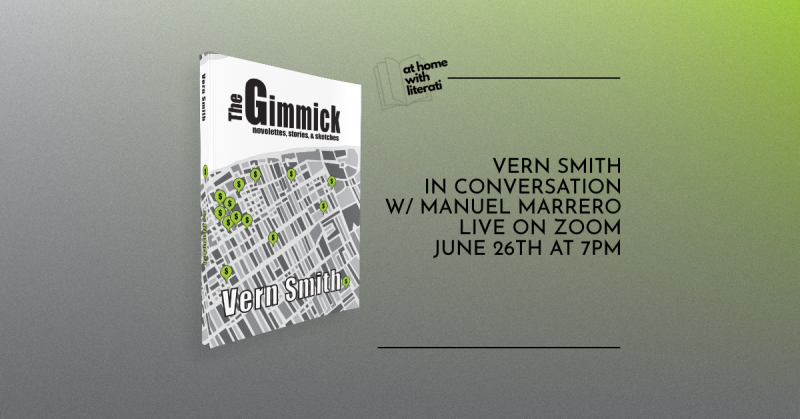 We're pleased to welcome Vern Smith to our At Home with Literati series of virtual events in support of his novellete, The Gimmick. He'll be in conversation with author Manuel Marrero.

"Vern Smith is a phantasmatic presence hovering over hard luck debacles and muted urban theater, colloquy consisting of full-bodied gestures captured in the word, messy lives tangled at the root, twisting misshapen into bloom. He haunts the North American literary canon with a salt-of-the-earth journalist's ear for the unspoken and unspeakable. There is an uncanny violence to these selections, as if there before the fact, now willed into expression in lean, muscular, lockstep cadences that model with sobering, unsentimental reverence and radical, stethoscopic clarity the raging interiority of the North American animal/everyman/mammal. With preternatural stylistic range, Vern Smith renders the ineffable with documentary devotion. It is poetic realism with exacting, brutal command of the minimal. Nothing less than ink, pulp, and blood amalgamated with sinew and synapses." - Manuel Marrero, author of Not Yet

Vern Smith is the author of The Green Ghetto (Run Amok Books), a novel set on Detroit's dysfunctional prairie. Broken Pencil calls it "a model for modern westerns." His fiction has appeared in several anthologies and magazines, most recently Corporate Catharsis (Paper Angel Press) and BULL. His novelette, The Gimmick, was a finalist for Canada's highest crime-writing honor, the Arthur Ellis Award. A veteran of four daily newspapers, three magazines, two radio stations, and one government caucus, he is a native of Windsor, Ontario and a longtime resident of Toronto. Since immigrating to the U.S., he has lived on the edge of Chicago in quasi-rural Illinois where the streets are named after dead golfers. Coincidentally, he has just wrapped a novel about a caddy pulling a payroll heist. It is called Under the Table and will be published by Run Amok Books.

Manuel Marrero is a writer, editor, and the founder of Expat Press. His works include the novel Thousands of Lies and the upcoming novel Not Yet. He can be found channeling spirits on Twitter here. Other excerpts from Not Yet can be found at Joyless House Publishing, Maudlin House, and Expat Press.