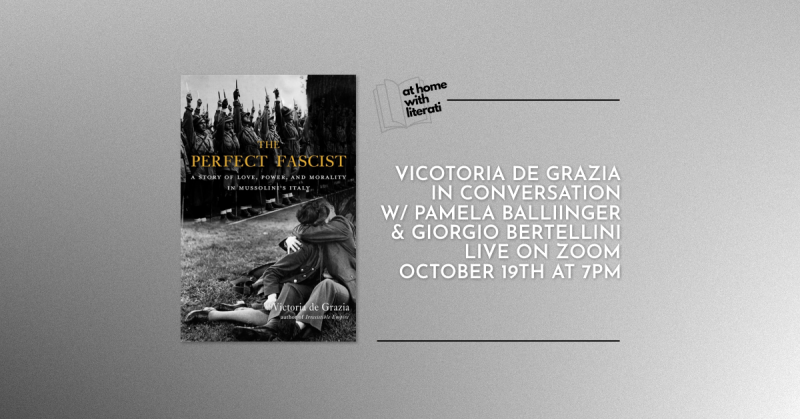 We're pleased to welcome Victoria de Grazia to our At Home with Literati series of virtual events in support of The Perfect Fascist. She'll be in conversation with professors Pamela Ballinger & Giorgio Bertellini from The University of Michigan.

Note: we are now hosting on Zoom webinars. You will be prompted to enter a first name and email upon joining. You may see a window reading "waiting for host to start webinar," but sit tight--you will be admitted as soon as we begin broadcasting live! You will be able to submit questions using the Q&A feature.

About the book: When Attilio Teruzzi, Mussolini’s handsome political enforcer, married a rising young American opera star, his good fortune seemed settled. The wedding was a carefully stage-managed affair, capped with a blessing by Mussolini himself. Yet only three years later, after being promoted to commander of the Black Shirts, Teruzzi renounced his wife. In fascist Italy, a Catholic country with no divorce law, he could only dissolve the marriage by filing for an annulment through the medieval procedures of the Church Court. The proceedings took an ominous turn when Mussolini joined Hitler: Lilliana Teruzzi was Jewish, and fascist Italy would soon introduce its first race laws.

The Perfect Fascist pivots from the intimate story of a tempestuous seduction and inconvenient marriage—brilliantly reconstructed through family letters and court records—to a riveting account of Mussolini’s rise and fall. It invites us to see in the vain, loyal, lecherous, and impetuous Attilio Teruzzi, a decorated military officer, an exemplar of fascism’s New Man. Why did he abruptly discard the woman he had so eagerly courted? And why, when the time came to find another partner, did he choose another Jewish woman as his would-be wife? In Victoria de Grazia’s engrossing account, we see him vacillating between the will of his Duce and the dictates of his heart.

De Grazia’s landmark history captures the seductive appeal of fascism and shows us how, in his moral pieties and intimate betrayals, his violence and opportunism, Teruzzi is a forefather of the illiberal politicians of today.

Victoria de Grazia is Moore Collegiate Professor of History at Columbia University and a founding editor of Radical History Review. Her widely translated, prizewinning books include Irresistible Empire: America’s Advance through Twentieth-Century Europe and How Fascism Ruled Women. She has received the Woodrow Wilson, Jean Monnet, and Guggenheim fellowships and the Rome Prize Fellowship from the American Academy in Rome.

The Perfect Fascist: A Story of Love, Power, and Morality in Mussolini's Italy (Hardcover)