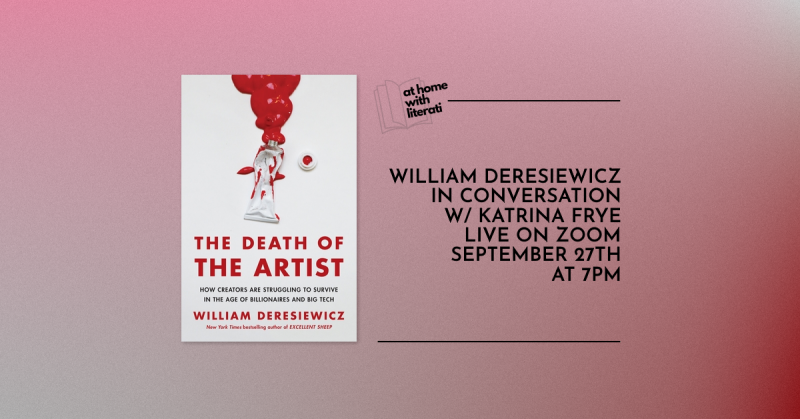 We're pleased to welcome William Deresiewicz to our At Home with Literati virtual events series in support of The Death of The Artist. He'll be in conversation with Katrina Frye, founder and CEO of Mischief Managed.

About the book: A deeply researched warning about how the digital economy threatens artists' lives and work—the music, writing, and visual art that sustain our souls and societies—from an award-winning essayist and critic.

William Deresiewicz is an award-winning essayist and critic, frequent speaker at colleges and other venues, and former professor of English at Yale. His writing has appeared in the Atlantic, the New York Times, Harper’s, The Nation, The New Republic, The American Scholar, and many other publications. He is the recipient of a National Book Critics Circle award for excellence in reviewing and the New York Times bestselling author of Excellent Sheep and A Jane Austen Education.

After years of sitting behind the desk, seeing other's ideas through, ensuring someone else's business was operational, Katrina Frye decided to use her expertise with the one community she is most passionate about - artists. While earning her bachelors degree in Visual Arts she quickly saw a lack of understanding and training on how an artist goes from the studio into the gallery. Katrina began to explore this gap of information and headed back to school to receive her masters in Arts Management from the Drucker School of Business. Now with ten years of arts management experience Katrina is uniquely positioned to share her findings through her company, Mischief Managed. Founded in 2016 Mischief Managed has supported over 100 artists around the nation to achieve their dreams.

The Death of the Artist: How Creators Are Struggling to Survive in the Age of Billionaires and Big Tech (Hardcover)