At Home with Literati: Writing About Place When That Place Is Michigan 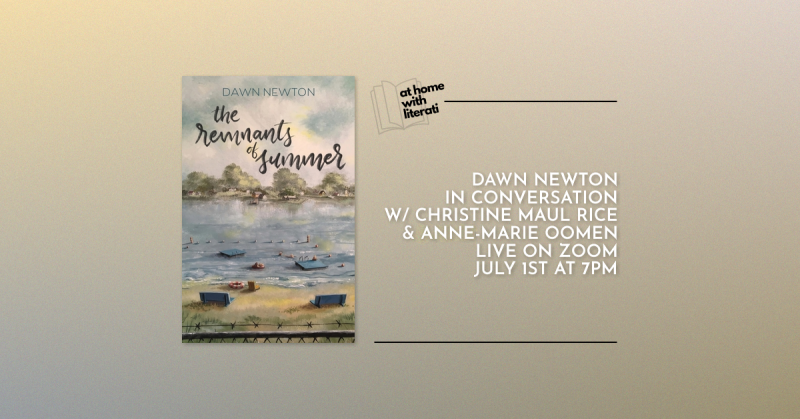 We're pleased to welcome Dawn Newton to our At Home with Literati Series in support of The Remnants of Summer and for a reading and talk entitled "Writing About Place When That Place Is Michigan." She'll be joined in conversation by Christine Maul Rice and Anne-Marie Oomen.

Enjoying At Home with Literati? Donate $5 to sustain our programming here.
Dawn Newton is the author of Winded: A Memoir in Four Stages, which details her journey with stage IV lung cancer. She was trained as a fiction writer and received scholarships to attend Michigan State University and Johns Hopkins University.

Dawn has taught composition and creative writing at several colleges and in K–12 classrooms in Virginia and Michigan. Her essays, poems, and short stories have been published in various literary magazines. She has three grown children—Rachel, Connor, and Nathaniel—and lives with her husband, Tim, and their dog, Clover, in East Lansing, Michigan.

Christine Maul Rice’s novel Swarm Theory was awarded an Independent Publisher Book Award and a National Indie Excellence Award, as well as earning an Honorable Mention in the Chicago Writers Association for Book of the Year awards. Swarm Theory also made PANK’s Best Books of 2016, and was included in Powell’s Books Mid-year Roundup: The Best Books of 2016 So Far. She was included in New City's Lit 50: Who Really Books in Chicago 2019 and named One of 30 Writers to Watch by Chicago's Guild Complex. Christine's short stories have been published in MAKE Literary Magazine, BELT’s Rust Belt Anthology, and The Literary Review, among others. Her essays, interviews, and long-form journalism have appeared in The Rumpus, McSweeney’s Internet Tendency, The Big Smoke, The Millions, Chicago Tribune, Detroit’s Metro Times, among other publications. Christine has served as faculty at conferences including Northwestern University Summer Writers’ Conference, Interlochen's Writers Retreat, and Shake Rag Alley Writers’ Retreat. Christine taught in Columbia College Chicago's Fiction Writing Department for over 20 years and is the founder and editor of the arts and culture nonprofit Hypertext Magazine & Studio.
Anne-Marie Oomen co-authored Lake Michigan Mermaid: A Tale in Poems, a 2019 Michigan Notable Book. She wrote Love, Sex and 4-H; Pulling Down the Bar; House of Fields, another Michigan Notable Book; An American Map: Essays, and a full-length collection of poetry, Uncoded Woman (Milkweed Editions). She edited Elemental, A Collection of Michigan Nonfiction (2019 Michigan Notable Book) and Looking Over My Shoulder: Reflections on the Twentieth Century, a Michigan Humanities Council Project. She has written seven plays, including award-winning Northern Belles and Secrets of Luuce Talk Tavern, 2012 winner of the CTAM contest. She is founding editor of Dunes Review: Northern Michigan’s Literary Magazine; former president of Michigan Writers, Inc.; and an instructor at the Solstice MFA in Creative Writing at Pine Manor College and Interlochen College of Creative Arts. She is a dedicated water advocate on projects concerning water justice and water preservation. She and her husband, David Early, built their own home on wild acreage near Empire, Michigan, and near their beloved Lake Michigan.
Event date:
Thursday, July 1, 2021 - 7:00pm
Event address:
Live on your device

The Remnants of Summer (Paperback)

Elemental: A Collection of Michigan Creative Nonfiction (Made in Michigan Writers) (Paperback)