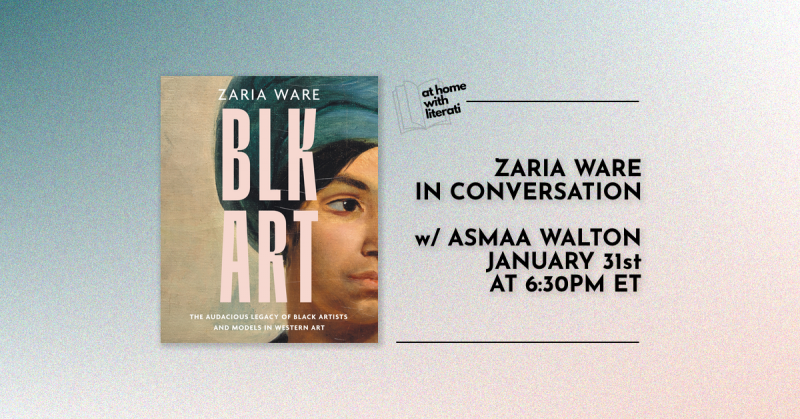 We're pleased to welcome Zaria Ware to our At Home with Literati Series in support of BLK ART. She will be joined in conversation by Asmaa Walton.

Click here to join the webinar event on 1/31. No pre-registration required!

About the book: A fun and fact-filled introduction to the dismissed Black art masters and models who shook up the world.

Elegant. Refined. Exclusionary. Interrupted. The foundations of the fine art world are shaking. Beyoncé and Jay-Z break the internet by blending modern Black culture with fine art in their iconic music video filmed in the Louvre. Kehinde Wiley powerfully subverts European masterworks. Calls resonate for diversity in museums and the resignations of leaders of the old guard. It's clear that modern day museums can no longer exist without change--and without recognizing that Black people have been a part of the Western art world since its beginnings.

Quietly held within museum and private collections around the world are hundreds of faces of Black men and women, many of their stories unknown. From paintings of majestic kings to a portrait of a young girl named Isabella in Amsterdam, these models lived diverse lives while helping shape the art world along the way. Then, after hundreds of years of Black faces cast as only the subject of the white gaze, a small group of trailblazing Black American painters and sculptors reached national and international fame, setting the stage for the flourishing of Black art in the 1920s and beyond. Captivating and informative, BLK ART is an essential work that elevates a globally dismissed legacy to its proper place in the mainstream art canon. From the hushed corridors of royal palaces to the bustling streets of 1920s Paris--this is Black history like never seen before.

Zaria Ware is an award-winning poet and writer and lover of all things historical. She fell in love with the past and longed to see herself in it which is why she has created BLK ART.

Asmaa Walton is a Detroit native, arts educator and ardent developer of the Black cultural archive. Walton earned a bachelor of fine arts degree in art education from Michigan State University in 2017. Upon earning a master’s degree in art politics from New York University’s Tisch School of the Arts in 2018, Walton joined the Toledo Museum of Art as an Education and Engagement Intern. In the same year, she was appointed the museum’s first KeyBank Fellow in Diversity Leadership, a position where she identified opportunities for diversity and equity programming across museums and cultural institutions. In 2019, Walton was appointed Romare Bearden graduate Museum Fellow at the Saint Louis Art Museum. In February 2020, she established Black Art Library—a collection of publications, exhibition catalogues and theoretical texts about Black art and visual culture intended to become a public archive in a permanent space in Detroit.