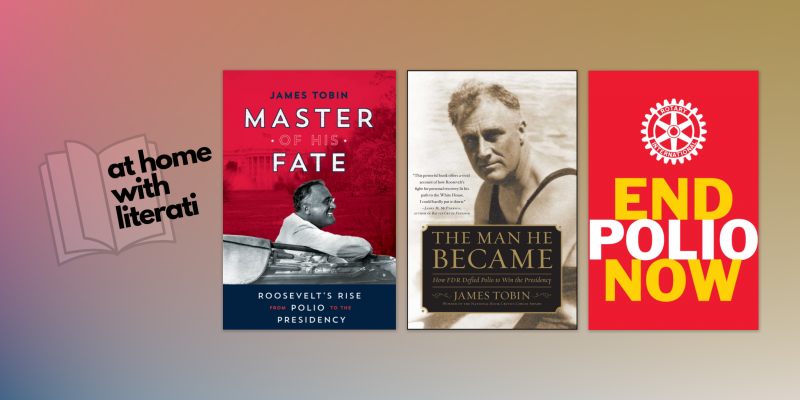 Literati is pleased to partner with Rotary District 6380 to present a conversation with James Tobin in support of End Polio Now fundraising.

Admission to this virtual event is available by a donation of any amount, and all donations will go directly to Rotary's End Polio Now initiative. Additionally, tickets bundled with a set donation amount and a copy of either The Man He Became or Master of His Fate (a wholly new version of the story of FDR and polio for young readers) are available and the price includes a donation of all proceeds after the price of the book. Please read ticket descriptions carefully for information on order fulfillment.

The evening will feature James Tobin in conversation discussing his books on president Franklin D. Roosevelt.

James Tobin is an award-winning biographer. He won the National Book Critics Circle Award in biography for Ernie Pyle’s War and the J. Anthony Lukas Work-in-Progress Award for To Conquer the Air: The Wright Brothers and the Great Race for Flight. He teaches narrative nonfiction in the Department of Media, Journalism, and Film at Miami University in Oxford, OH.

About Rotary: Rotary unites more than a million people. Together, we see a world where people unite and take action to create lasting change – across the globe, in our communities, and in ourselves.

Ending polio: Rotary members have played a key role in bringing the world to the brink of polio eradication. Rotary members have contributed more than $2.1 billion and countless volunteer hours to protect nearly 3 billion children in 122 countries from this paralyzing disease. Rotary’s advocacy efforts have played a role in decisions by governments to contribute more than $10 billion to the effort.

Join Leaders: club activities, social events, and volunteer projects offer networking opportunities that build personal and professional connections. And Rotarians can extend those networks by visiting other clubs around the globe.

For more information on how you can make an impact, go to: https://rotary6380.org/