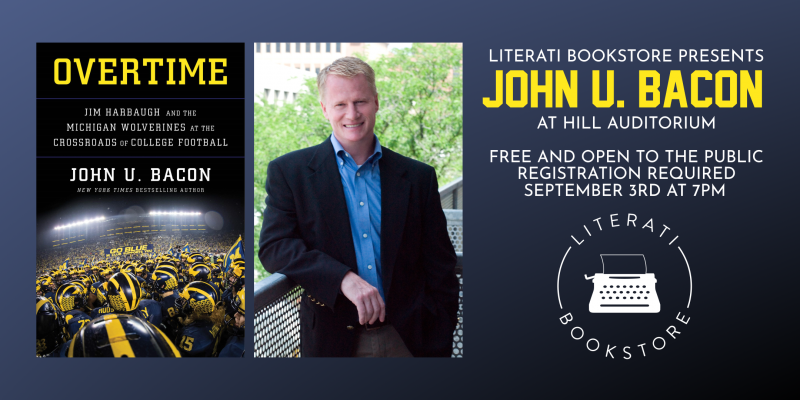 RSVP, or RSVP and purchase a signed copy of the book to pick up at the event here. Registration is not required but is encouraged.

Literati Bookstore is thrilled to welcome national bestseller John U. Bacon to the historic Hill Auditorium on the campus of the University of Michigan as he launches his latest book, Overtime: Jim Harbaugh and the Michigan Wolverines at the Crossroads of College Football. Following an introduction by Sam Webb and Ira Weintraub of WTKA's The Michigan Insider, John will give a book talk and answer audience questions.

A map of walkable parking structures can be found here.

About Overtime: For the past year, John U. Bacon has received unprecedented access to Jim Harbaugh’s University of Michigan football team: coaches, players, and staffers, in closed-door meetings, locker rooms, meals, and classes. Overtime captures this storied program at the crossroads, as the sport’s winningest team battles to reclaim its former glory. But what if the price of success today comes at the cost of your soul? Do you pay it, or compete without compromising?

Overtime delivers a riveting and revealing insider's account of the Harbaugh era, a deeply reported human portrait of a big-time college football program.

In the spirit of HBO’s Hardknocks, Overtime follows the Wolverine coaches, players, and staffers through the 2018 season, including Harbaugh, offensive stars Shea Patterson and Karan Higdon, NFL-ready defensive standouts Rashan Gary, Devin Bush Jr., and Chase Winovich, second-stringers striving to find their place on the team, and their parents’ reactions to it all. Bacon met with them every week during a season that saw the Wolverines ride a ten-game winning streak to #4 in the nation, then take a beating at the hands of arch-rival Ohio State, led by controversial coach Urban Meyer, Harbaugh’s foil. Overtime also previews the crucial 2019 campaign ahead.

Above all, this is a human story. In Overtime we not only discover what these public figures are like behind the scenes, we learn what the experience means to them as they go through it – the trials, the triumphs, and the unexpected answers to a central question: Is it worth it?

John U. Bacon is the author of the national bestseller The Great Halifax Explosion and four bestselling books about college football, including Three and Out, Fourth and Long, Endzone, and Bo’s Lasting Lessons, co-authored with Michigan coach Bo Schembechler. A former feature writer for the Detroit News, his writing has been recognized three times in The Best American Sports Writing series. He appears often on NPR and national television, including ESPN’s 2019 documentary series on college football. He has taught at Northwestern University’s Medill School of Journalism and the University of Michigan. A popular public speaker, he lives in Ann Arbor with his wife and son.