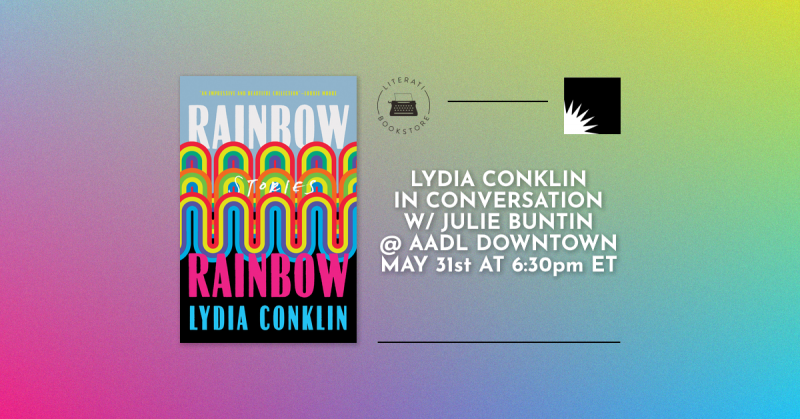 We're pleased to partner with the Ann Arbor District Library to host Lydia Conklin as they launch their debut story collection Rainbow Rainbow. The event is free and open to the public. Lydia will be joined in conversation by author Julie Buntin. Additional event details to follow.

About the book: A fearless collection of stories that celebrate the humor, darkness, and depth of emotion of the queer and trans experience that's not typically represented: liminal or uncertain identities, queer conception, and queer joy

In this exuberant, prize-winning collection, queer, trans, and gender-nonconforming characters seek love and connection in hilarious and heartrending stories that reflect the complexity of our current moment.

A nonbinary writer on the eve of top surgery enters into a risky affair during the height of COVID. A lesbian couple enlists a close friend as a sperm donor, plying him with a potent rainbow-colored cocktail. A lonely office worker struggling with their gender identity chaperones their nephew to a trans YouTube convention. And in the depths of a Midwestern winter, a sex-addicted librarian relies on her pet ferrets to help resist a relapse at a wild college fair.

Capturing both the dark and lovable sides of the human experience, Rainbow Rainbow establishes debut author Lydia Conklin as a fearless new voice for their generation.

Lydia Conklin has received a Stegner Fellowship, a Rona Jaffe Foundation Writer's Award, three Pushcart Prizes, a Creative Writing Fulbright in Poland, a grant from the Elizabeth George Foundation, scholarships from Bread Loaf, and fellowships from Emory, MacDowell, Yaddo, Hedgebrook, Djerassi, and elsewhere. Their fiction has appeared in Tin House, American Short Fiction, and The Paris Review. They've drawn comics for The New Yorker, The Believer, Lenny Letter, and elsewhere. They are currently the Zell Visiting Professor of Fiction at the University of Michigan.
Julie Buntin grew up in northern Michigan. Her debut novel, Marlena, was a finalist for the National Book Critics Circle’s John Leonard Prize, and her novel-in-progress won the Ellen Levine Fund for Writers Award. Other writing has appeared in the Atlantic, Vogue, the New York Times Book Review, Guernica, and elsewhere. She has received fellowships from Bread Loaf and the MacDowell Colony, and is an editor-at-large at Catapult. She teaches creative writing at the University of Michigan.
Event address:
343 S 5th Ave
Ann Arbor District Library: Downtown Branch
Ann Arbor, MI 48104
Books: