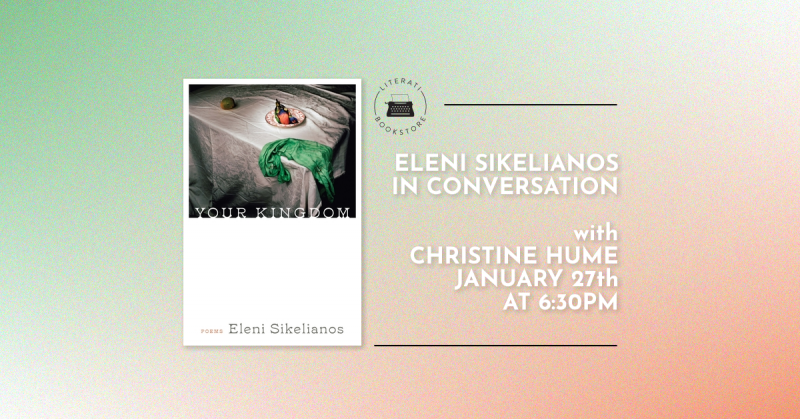 We're pleased to welcome Eleni Sikelianos in support of her new poetry collection, Your Kingdom. Following a reading, Eleni will be joined in conversation by Christine Hume.

About the collection: Eleni Sikelianos, "a master of mixing genres" (Time Out New York), further bends time and space in Your Kingdom, an ode to our more-than-human animal origins. As she studies the wild roots of our past, present, and future, Sikelianos, one of our foremost practitioners of ecopoetic exploration, finds solace in the complexity of our natural lineage as we face the environmental precarity of the present.

Our shoulders and hips were invented by salamanders. Hidden motives bind us to cuckoos and caterpillars. Our faces form biological maps while our organs trace the shapes of our animal ancestors. From the cellular to the celestial, Your Kingdom inquisitively and energetically investigates our notion of biological kingdoms, calling us to "let the body feel all its own evolution inside."

Eleni Sikelianos was born and grew up in California, and has lived in New York, Paris, Athens (Greece), Colorado, and now, Providence. She is the author of nine books of poetry, most recently What I Knew and Make Yourself Happy, and two hybrid memoir-verse-image-novels, The Book of Jon and You Animal Machine. A number of her books have appeared in French and one in Greek, and her work has been translated into many other languages. She has been at the forefront of ecopoetics and hybrid work since the early 2000s, exploring family as well as animal lineages. Her work has been widely fêted and anthologized, garnering numerous awards, including from the National Endowment for the Arts, the Fulbright Program, the National Poetry Series, New York Foundation for the Arts, Princeton University's Seeger Center, and the Gertrude Stein Awards in Innovative American Poetry. Dedicated to the many ways poetry manifests in communities, she has taught workshops in public schools, homeless shelters, and prisons, and collaborated with musicians, filmmakers, and visual artists. She currently teaches at Brown University.

Christine Hume is Professor of English in the Creative Writing Program at Eastern Michigan University. She is the author of several books, including Saturation Project and Shot.

What I Knew (Paperback)