Predator: A Memoir, a Movie, an Obsession | Film Screening & Discussion 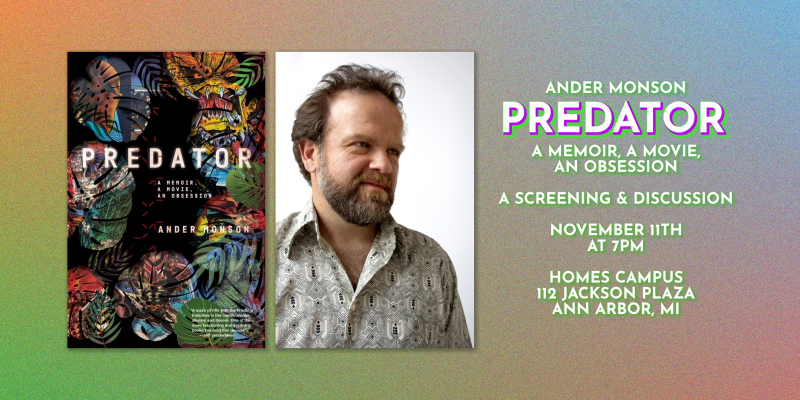 General admission tickets are available and can be used toward $5 off a copy of the book when purchased on-site. Book bundle tickets are also available. Beer will be available to purchase from HOMES Campus.

About the book: In his first memoir, Ander Monson guides readers through a scene-by-scene exploration of the 1987 film Predator, which he has watched 146 times. Some fighters might not have time to bleed, but Monson has the patience to consider their adventure, one frame at a time. He turns his obsession into a lens through which he poignantly examines his own life, formed by mainstream, White, male American culture. Between scenes, Monson delves deeply into his adolescence in Michigan’s Upper Peninsula and Riyadh, his role as a father and the loss of his own mother, and his friendships with men bound by the troubled camaraderie depicted in action and sci-fi blockbusters. Along with excursions into the conflicted pleasures of cosplay and first-person shooters, he imagines himself beside the poet and memoirist Paul Monette, who wrote the novelization of the movie while his partner was dying of AIDS.

A sincere and playful book that lovingly dissects the film, Predator also offers questions and critiques of masculinity, fandom, and their interrelation with acts of mass violence. In a stirring reversal, one chapter exposes Monson through the Predator’s heat-seeking vision, asking him, “What do you know about the workings of the hidden world?” As Monson brings us into the brilliant depths of the film and its universe, the hunt begins.

Ander Monson is the author of eight previous books, including I Will Take the Answer and Vanishing Point: Not a Memoir, a finalist for the National Book Critics Circle Award. He edits DIAGRAM and teaches at the University of Arizona.